Chart of the day

How do you get paid? 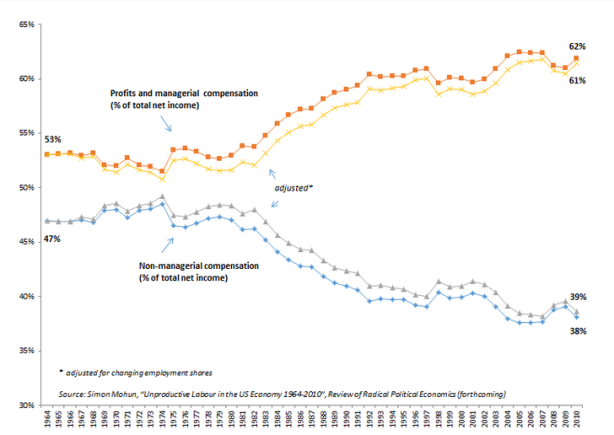 As if to illustrate the point I made the other day (about earnings at the top being themselves distributions of the income captured by capital), Seth Ackerman put together the chart above (from data in Simon Mohun’s recently published article on unproductive labor) comparing the sum of profits and managerial compensation to non-managerial compensation, both as shares of total net income.

Indeed, in a direct rebuttal of the neoclassical marginal-productivity theory of distribution, capital’s share of income has been growing at the expense of labor’s share since the late-1970s.

Narrative is often forced. Why should writers oblige rushed readers to plough through their concocted stories? The advantage of those pieces of Internet click-bait – 10 reasons why Putin is a paedophile, 164 ships to visit before you die – is that they convey chunks of information in palatable slices. You can skip the things that don’t interest you without losing your place.

Lots of authors might as well just list their unconnected ramblings by number. They’re in a privileged position and excess verbiage is self-indulgence. More often than not our treatises are imagined. I doubt that the Internet is killing the written word. Far from the end of a golden age of literature, we’re all probably now reading more than ever before, just in smaller bits.

WASHINGTON — Pay for globe-trotting CEOs has soared to new heights, even as most workers remain grounded by paychecks that are barely budging.

While pay for the typical CEO of a company in the Standard & Poor’s 500 stock index surged 9% last year to US$10.46 million, it rose a scant 1.3% for U.S. workers as a whole. That CEO now earns 257 times the U.S. national average, up from a multiple of 180 in 2009, according to an analysis by The Associated Press and Equilar.

Those figures help reveal a widening gap between the ultra-wealthy and ordinary workers around the world. That gap has fed concerns about economic security — everywhere from large cities where rents are high to small towns where jobs are scarce.

Here are five reasons why CEOs are enjoying lavish pay increases and five reasons many people are stuck with stagnant incomes.

Dan Kervick: “My own view is that in the early 21st century we are seeing the beginnings of an epic power struggle between the forces of democratically organized political communities, which are everywhere under threat and have fallen into a state of decay and corruption, and the forces of concentrated private socioeconomic power represented by corporations, wealthy individuals, wealthy families and the governmental institutions that they have captured.”

“The point of this example: lots of errors are made—and then repeated by authors and overlooked by readers—even in the most famous writings of economists. And the errors committed in Samuelons’ Foundations certainly didn’t stop the mathematization of mainstream economics in the postwar period.” 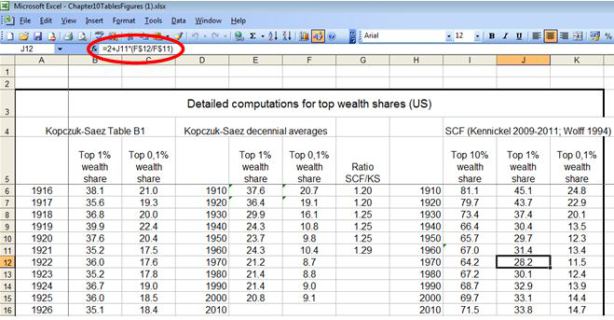 The storm unleashed by Chris Giles’s takedown (follow the links) of Thomas Piketty for the Financial Times (with responses now by Piketty himself, Neil Irwin, Simon Wren-Lewis, Steven Pressman, and others) reminds me of two stories.

First, there’s the story of a seminar by Hollis Chenery, one of the pioneers of economy-wide development planning models, at Yale University in the early 1970s. One of the participants in the seminar, who later was one of my professors in graduate school, offered Chenery a large sum of money to put together the appropriate matrix of data—and then an even larger sum of money not to invert the matrix. The point: there are so many mistakes, assumptions, and elements of pure guesswork involved in compiling any set of economic data, it is a fundamental mistake to presume the correct economic policy or strategy can be devised—and then offered as objective…

Social mobility, fixed forever? Gregory Clark’s The Son Also Rises is a book of scholarship, and of scholastic overreach

Excellent look at Gregory Clark’s tome, The Son Also Rises, and where it works as well as where it falls short.

[ This post is a book review of: Gregory Clark (with Neil Cummins, Yu Hao, and Daniel Diaz Vidal and others), 2014. The Son Also Rises: Surnames and the History of Social Mobility. Princeton and Oxford: Princeton University Press. ]

The Son Also Rises forcefully advances the idea that social position is determined by innate inherited abilities, an idea that is potentially pregnant with policy implications. “Once you have selected your mate,” Gregory Clark counsels, “your work is largely done. You can safely neglect your offspring, confident that the innate talents you secured for them will shine through regardless.”

With this book Professor Clark (an economic historian with the University of California at Davis) dons the mantle of Francis Galton, who more than 100 years ago examined the transmission of status across the generations of 19th century England, and who is equally known for the statistical methods he…