Business is booming at the low end of the social ladder.

MONTREAL — Dollarama Inc. says its fourth-quarter profit rose about 21 per cent to $100.3 million — above analyst estimates.

It also announced a hike to its quarterly dividend, which will rise by 12.5 per cent to nine cents per share, starting on May 7.

Sales for the Montreal-based company rose to $669 million for the quarter ended Feb. 1, up 14.9% from a year earlier, while sales for comparable locations were up 8.5 per cent. 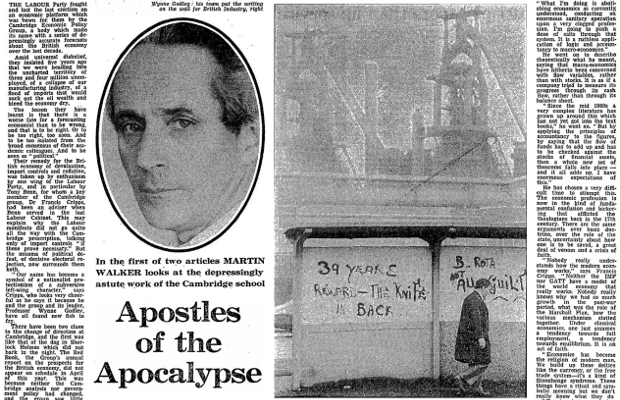 Models, maths and macro: A defence of Godley

To put it bluntly, the discipline of economics has yet to get over its childish passion for mathematics and for purely theoretical and often highly ideological speculation, at the expense of historical research and collaboration with the other social sciences.

The quote is, of course, from Piketty’s Capital in the 21st Century. Judging by Noah Smith’s recent blog entry, there is still progress to be made.

Smith observes that the performance of DSGE models is dependably poor in predicting future macroeconomic outcomes?precisely the task for which they are widely deployed. Critics of DSGE are however dismissed because?in a nutshell?there’s nothing better out there.

This argument is deficient in two respects. First, there is a self-evident flaw in a belief that, despite overwhelming and damning evidence that a particular tool is faulty?and dangerously so?that tool should not be abandoned because there is no obvious replacement.