Not your grandparent’s retirement

Here are projected population pyramids for Canada (2016 – 2036). (Source: Populationpyramid.net ). The triangles have been added by me to illustrate those of retirement age among the population projections. 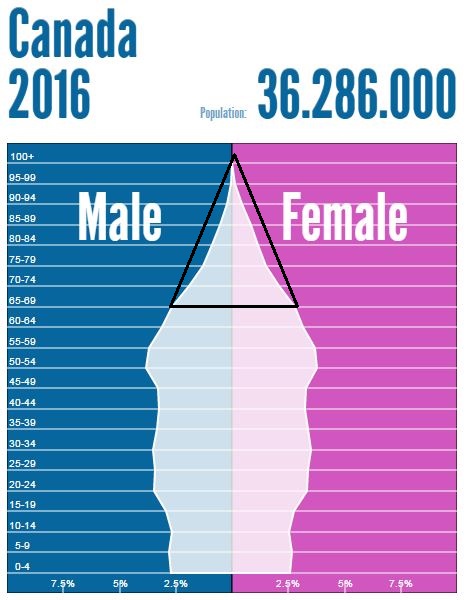 Notwithstanding the advances in medical science, we understand that people do not live forever –yet they do live longer so while the population itself is increasing, the proportion of the population that is technically retired (i.e. past the age of 65) is increasing as well; this proportion of retirees can be seen in a stylized fashion by the ever expanding triangles above.

Then there was this article in this morning’s Globe and Mail (click on link to go to the full article): Still working in retirement: Three people tell their stories

Working in retirement is the new reality for many. Some struggle financially and can’t afford to retire, while others simply don’t want to stop working. Often it’s a combination of factors that determine whether you can choose your retirement date.

Ms. Hawkins is a registered nurse in the cardiac catheterization lab at Toronto Western Hospital. She loves her job but she would have liked to retire last year and travel. The sudden loss of her partner of 10 years altered her situation financially and emotionally, however.

“When you have two incomes and you move to one, it’s difficult,” says Ms. Hawkins. “Two people can live in a house for the same cost as one person. The only difference is the cost of food, which isn’t a lot for people at our age.”

She says she’s still working because, first of all, she needs a reason to get out of bed in the morning. Also, despite making a statutory declaration of the common-law union with her partner, she hasn’t been able to provide sufficient documentation, such as a shared mortgage or joint bank account, to claim survivor benefits for his pensions. Although they shared expenses, each kept their own bank account and Ms. Hawkins had already paid for the house in her name.

Even though she has worked as a nurse for 45 years, Ms. Hawkins says she doesn’t have enough pension income to retire, even factoring in Canada Pension Plan (CPP) and Old Age Security (OAS) benefits. When her boys were growing up, she worked part-time and, back then, part-time workers weren’t eligible to contribute to a pension plan, although that’s changed now.

Another concern is that she might not be able to care for herself someday and would need to go into a nursing or seniors’ home. “That changes everything,” says Ms. Hawkins. “It costs at least $3,500 to $4,000 a month just for a single person at a no-frills facility in Toronto. I don’t want to be a burden on my children.”

(Italics and underlined text above added by me)

The nurse in the case above still has recourse to claim survivor benefits; while each case is unique –and perhaps the article doesn’t delve deeply into the minutiae of her particular case– there appears to be enough of reason to argue against the pension administrators original decision and fight further for funds that would make a material difference in this person’s standard of living.

It is also interesting that in using the words “she needs a reason to get out of bed in the morning” the nurse shows that the idea of retirement as a concept has changed and will continue to change — by necessity for most and by choice for some. From the point of view of dependency ratio, Statistics Canada shows that there will be fewer working age people compared to retirees going forward. (Source: Dependency ratio by Statistics Canada)

I suspect that a future Federal Government will make the unpopular decision to raise Old Age Security (OAS) eligibility further (it will go from 65 to 67 in 2023). Lest we forget, retirement is a relatively new concept in modern societies and Canada is no different. Our concept of retirement came to fruition in the 1930s when the Prime Minister Mackenzie King introduced the Old Age Pensions Act in Canada in 1927. The starting age for benefit payments at that time was 70 and the pensionable age for government benefits remained 70 until 1953.

In addition to the challenges of  the dependency ratio, this past generation has seen a crumbling away of the social contract between employers and employees. The move to shift market risk onto employees and at the same time cut the cost of employee benefits has seen the shift of retirement pension plans from a defined benefit to a defined contribution template. People cannot invest well; most cannot fathom what market risk means and almost all who do not have the comfort of a gold plated pension, wholly misunderstand the need to match future cash flows with future liabilities in one’s so called golden years. It isn’t just a game of growing one’s assets. Everyone’s balance sheets and income statements are different with a unique set of constraints.
The paucity of long-term guaranteed income will drive many retirees back to the
workplace. It remains to be seen what effect technology will have on making current jobs redundant. For the moment, industries such as health care are facing the prospect of losing many of their workers to retirement in the coming decade. Will they come back and if they want to come back will there be a job waiting for them?