No sign of housing bubble, says Bank of England. Is this reasonable?

From the Daily Mail:

The Bank of England yesterday said it is ‘closely’ watching the UK housing market for signs of a new and dangerous bubble.

The central bank’s Financial Policy Committee, set up to protect the financial system, said ‘the recovery in the housing market appeared to have gained momentum and to be broadening’.

It said mortgage approvals in July were 30pc higher than a year earlier. Average house prices in August were up 5pc ‘and had risen more in some parts of the country, particularly London’.

The recovery has fueled fears that Britain is heading for another housing bubble, stoked by state-backed schemes such as Funding for Lending and Help to Buy.

The Bank insisted there was no sign of a bubble developing.

Is the BOE’s insistence that there was no sign of a bubble developing reasonable?

Take a look at this graphic created by Neal Hudson (Website: http://www.nealhudson.com ) which shows the evolution of median house price to earnings in England from 1997 to 2012. As The Economist newspaper would say in its typically pithy manner “Housing hots up!”

There is a conventional bias in viewing such things as asset prices in terms of a household’s net worth {PV (Asset – Liability)} and then rationalizing that the costs of servicing the liability are affordable because of the low rate environment.

It is important to add other elements to this.

What I am saying is nothing new: looking at the balances sheet, considering cash flows, and putting an emphasis on commitments are part and parcel of seeing money in non-neutral terms. In the case of homeowners in England there is the fundamental question of how long it will take to service the liability, in this case mortgages that are a far bigger multiple of income today than they were a decade ago, in an economy where the value of labour is at a discount and the power of capital trumps all other business considerations making the nature of employment increasingly precarious.

Hyman Minsky , in his 1986 book Stabilizing an Unstable Economy put it this way:

To analyze how financial commitments affect the economy it is necessary to look at economic units in terms of their cash flows. The cash-flow approach looks at all units—be they households, corporations, state and municipal governments, or even national governments—as if they were banks. (Minsky 1986, p. 198)

In terms of servicing, cash inflows must be greater than cash outflows –a basic reserve constraint, as Minsky put it or survival constraint as per the common terminology– but the fragility occurs the longer one is required to service these commitments. Can most people say with certainty that they can afford to service a mortgage for the rest of their working lives?

On the one hand, the quality of housing stock may be better now then in decades past: people desire creature comforts and consume conspicuously in order to keep up with the Joneses but the greater the stock of debt the greater the servicing burden. But on the other hand, absent steadily rising incomes that outstrip the cost of living over the period of mortgage, something that has not happened for the past generation, something will have to give: current consumption must be curtailed, or the stock of consumer debt must rise in order to fund consumption (needs to wants).

When governments bank on the wealth effect to spur economic growth they would be wise to remember that the greater fool theory, especially with respect to housing as a driver of growth, has an endpoint, one that often looks like this: 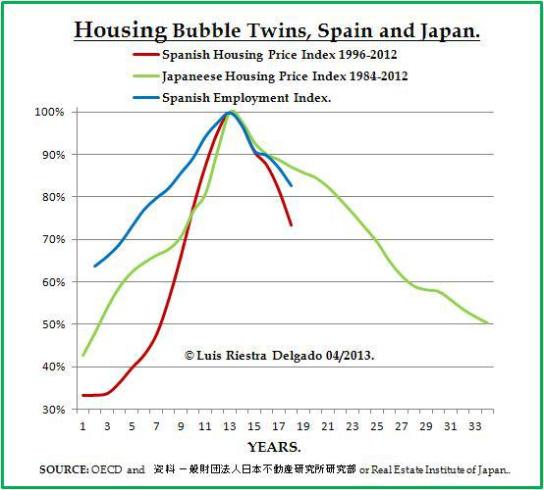