As the BOC action today shows

it is good to avoid spurious talk of ‘normalizing monetary policy’ when we are living in a paradigm of wage stagnation, precarious employment, household indebtedness, rising inequality, and job losses from off shoring and technological change.

Monetary policy is supposed to be the elixir to fix this? 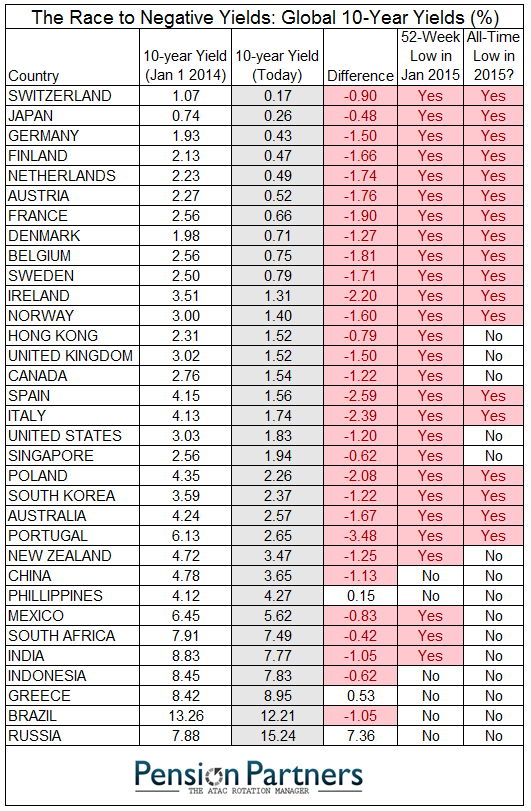 George Magnus on Boom and Bust

George Magnus, former chief economist at UBS, in conversation with RT’s Erin Ade on the emerging markets sell off, the concern with China, the demographic challenges facing advanced economies as well as Russia and China, and an assessment of Ben Bernanke’s tenure as FED chairman.

The Bank of Canada is set to release its interest rate announcement and Monetary Policy Report tomorrow morning at 10 AM (ET). There is an expectation of no policy rate change and the possibility of an easing bias by market participants. The former appears a good bet given the flow of economic data recently, from employment falling by 46,000 in December to  inflation remaining below the BOC’s 2% target yet remaining just within the central bank’s (1% to 3%) operating band.

The chart below illustrates three metrics, 2 observable the other an estimate, that BOC watchers pay close attention to: core inflation (in dark blue), the BOC target (i.e. policy) rate (in teal), and the output gap (in brown measured against the right Y-axis). It is the latter that should be reason enough to believe that the BOC policy rate will continue to flatline for the short term (2 years) as the slack in Canada’s economy continues to widen despite a low nominal central bank policy rate, credit extension by the banking sector, and federal and provincial governments that are running budget deficits.

My personal view is that there is no reason for the BOC policy rate to move up before the 2015 Federal elections. The Conservative government of Stephen Harper will be running, according to its Executive Director Dimitri Soudas,  on a platform of supposedly ‘strong, stable leadership’ (below).

Moreover, there is the determined effort on the part of the current Conservative Federal government to ‘balance the books’ and return Canada to the promised land of budget surpluses. For a graphic on how federal governments from the time of Lester B. Pearson’s Liberals to Stephen Harper’s Conservatives have fared in this endeavour, see this graphic from the CBC.

The idea of conflating the budget of a federal government with that of a household is attractive but it doesn’t work for Canada; it can for other nations, such as those under the monetary straitjacket of European Monetary Union, but it doesn’t make sense in the Canadian context. Every nation has a particular political economy to deal with that is the legacy of history and goepolitical relations. Moreover, the nature of a nation’s currency –is it sovereign or is it shared or pegged to global reserve currency– is worth considering as is the composition of that nation’s debt ownership.

Currently, the Canadian context is one where the household sector has taken on an increasing amount of debt –both residential mortgage and consumer– that will be serviced for the coming decades and at the same time the federal government has gone into deficit spending mode since the 2008 financial crisis.

Debt to income ratio in Canada

The Bank of Canada understands this and has made the explicit assumption in previous Monetary Policy Reports that the business sector would drive growth in the economy through capital investment. That hasn’t happened.

Arguably, businesses require signals from the consumer in order to have the confidence to enact capex. Say’s Law need not apply for most companies: supply does not create its own demand. The decision in favour of capex is demand driven. Absent that effective demand, businesses can propel growth via a combination of increasing efficieny or financial engineering. The former prescription has meant offshoring, outsourcing, and hiring more workers as temporary and, increasingly, the autommation of work that requires fewer and more specialized workers (if any as the graphic below concerning the decoupling of productiviy and employment illustrates).

The latter prescription has meant, at best, bringing leverage onto a company’s balance sheet as a catalyst to translate modest top line sales growth into robust bottom line profitability and, at worst, aggressive revenue recognition to make a balance sheet and income statement look better than it really is.

Fundamentally, the deficits of one sector emerge as the surpluses of another. If we consider the debt burden of most Canadian households in terms of the stock of liabilities divided by the flow of income, we recognize that the moribund income growth entails curtailing future discretionary consumption. Canadians have brought forth a lot of future consumption by taking on mortgage and consumer debt. This requires debt servicing. Furthermore, the demographic factors facing Canadian society are a challenge that this country’s policy makers are inadequately prepared for. As the dependency ratio increases, the growth trajectory decreases: older Canadians, many of whom have saved inadequately for retirement, won’t consume as they did during their working years.

The Bank of Canada will continue to cling to the hope that the sagging loonie will spur greater demand for Canadian exports and thus make their heretofore forecasts appear more credible. This is more faith and hope then scietific reasoning as the flipside to this is that it will make capital expenditures more expensive as that is invoiced in USD. The Canadian dollar remains a petrocurrency:

Market rates will continue to ebb and flow on the steady trickle of economic and financial data. Mortgage rates, in turn, will go up and down as a result based on the risk appetitite of the major banks. What won’t change is the policy rate: the Bank of Canada will be circumspect in articulating an easing bias as it won’t want to further inflame a housing market that is becoming expensive for most Canadians yet, in the face of the head winds facing the economy it is unlikely how the slack out of the economy will disappear over the coming years.

(Full disclosure: the author’s views are his own and he added allocation to XLB iShares in anticipation that 2014 would be a bounceback year for Canadian Long Bonds)

Destroying the prospects of of European youth isn’t restructuring.

In both Japan and the UK, QE isn’t working, he says, because it doesn’t focus on “the most important part of the money supply”, which is bank lending. “UK QE has singularly failed, as bank credit is still shrinking.”

When faced with the claim used by some British banks that the demand for credit is low, Prof Werner is dismissive. “I’m quite used to this argument, because banks in Japan used it for 20 years,” he says. “The banks, of course, have become very risk-averse, as they have many non-performing assets.”

Prof Werner is also critical of the UK’s concentrated banking structure – which he argues has made the economy more vulnerable. “British banking is dominated by a small number of big banks – with just five banks controlling 90% of deposits,” he says.

What is completely lost in that BBC article is that Werner has always emphasised that the effect of credit creation depends on the use of money. Werner cites two cases:

Case 1. The newly created purchasing power is used for transactions that are part of GDP. In this case, nominal GDP will expand: credit creation for ‘real economy transactions’ C(R) –> nominal growth can result in two outcomes

Case 2. Newly created purchasing power is used for transactions that are not part of GDP (financial and real estate transactions). In this case, GDP is not directly affected, but asset prices must rise (i.e. asset inflation): credit creation for financial transaction C(F) –> asset markets.

For a recent deck of his go here

That will be covered in the future on this site as it will become more relevant that rate normalization will not be around the corner in Canada, USA or elsewhere where the debt burden for households is large, debt servicing long and the banking sector is fundamentally an extender of credit for real estate speculation, development and home buying rather than a lender for funding new startup entrepreneurial ventures that are critical to economic rejuvenation but also risky: most fail. There isn’t an immediate solution to the lack of funding for start ups but new models of peer to peer lending may be an option.